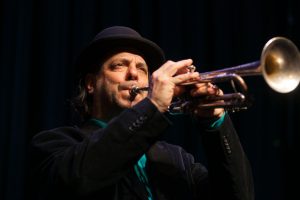 Frank London – New York-based composer and trumpeter, one of the best artists representing the so-called New Jewish Music, winner of Grammy award. Founder of The Klezmatics and leader of Frank London Klezmer Brass Allstars. Other projects include: Nigunim Trio, The Zmiros Project (Jewish mystical songs), The Shekhina Big Band, The Debt (musical film and theater), Invocations (hazzan music), he co-founded Les Miserables Brass Band and Klezmer Conservatory Band and is a member of Hasidic New Wave. His portfolio includes composing the music score for “A Night in the Old Marketplace,” the biggest and most important Jewish masterpiece since the time of the “Fiddler on the Roof.” He is often invited by various artists, including jazz, blues, and rock musicians, for joint projects. So far, he worked with numerous musicians, including John Zorn, LL Cool J, Lester Bowie Brass Fantasy, Dawid Byrne, Gal Costa, LaMonte Young, Iggy Pop, Natalie Merchant, They Might Be Giants, John Cale, Itzhak Perlman, and Jon Spencer Blues Explosion. His gusts performances include 100 albums and more than 300 recordings. He was applauded on the biggest international festivals and his concerts continue to be extremely popular. 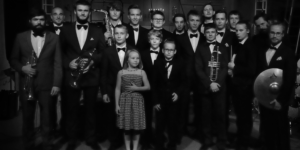 The Klezmer Orchestra of Sejny Theatre is composed of young people connected with Pogranicze Center and Foundation – of arts, cultures, and nations in Sejny, recalling and referring to the multicultural heritage of the Central and Eastern Europe. The Orchestra was founded during the works on the stage adaptation of Anski’s “The Dybbuk,” which premiered back in 1996. Ever since the fascinating adventure of the young people from the areas surrounding Sejny with klezmer music continues. Today, it is another generation of musicians from Sejny.

Klezmer music is present in Sejny in the White Synagogue on an everyday basis. Summer concerts bring together large audiences and became a permanent part of Sejny’s cultural calendar. For young people in Sejny town, Klezmer Orchestra is an experience that sometimes takes them further and influences their choices becoming their life path.

Today, the musicians are boosting Warsaw’s music stage, play in the most interesting formations, launch their own music initiatives. Meetings with Mikołaj Trzaska and Raphael Rogiński, the excellent musicians representing a young generation who search for inspiration in the Jewish music and who in recent years visited Sejny Jazz Cooperative (another long-term project run by musicians from Sejny) resulted in the new sound of Jewish music played in Sejny town.

The stage on Grzybowski Sq.