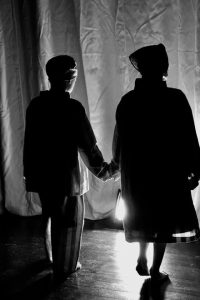 “A Cup” is a touching and at the same time funny story presenting the war from children’s perspective who see the evil that surrounds them differently than the grown-ups. The main theme of the show is not the war itself but the friendship between the children and the faith in ideals. A Jewish boy who is selling cigarettes in ghetto, Isrulik and Ida, a girl from a Polish, middle-class home who lives according to an idyllic vision of war created by her parents, are played by two talented young actresses.

Though made up, both, the protagonists and the plot were inspired by real events. Only the “Madam” recalled by Isrulik in his monologues is a real person, it is Irena Sendler. Her name is left out, the audience is to guess it because it is not mentioned during the show.

The inspiration for the music show “A Cup” was the Jewish song, performed in the show as well, “Isrulik” (music composed by M. Veksler, Polish lyrics written by Andrzej Głowacki). The show incorporates also fragments of Partita no. 2 for solo violin by J.S. Bach.