Performance: IT HAS BEEN [Questo è stato], directed by Fabio Fiori 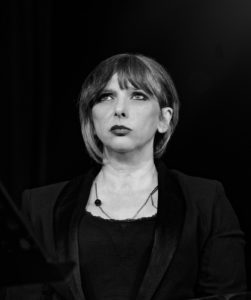 An actress tell a painfull story. The drama of the Jewish family confronting the racial laws. Five endless years lived in the nightmare. Time passes without any hope and tomorrow of or a future.

The actress-narrator lives in the story so deeply that she becomes the character of Piera Sonnino, the only survivor of a large Jewish family, who after many years, found the courage to tell her drama. A nightmare that comes true in all its horrifying brutality after 8th septemper 1943.

Protected by the solidarity and humanity of the common people, this family chooses to remain united instead of getting separated in search of safety behind the Swiss border. With their arrival in Auschwitz they fall into a „sea od mud”. A cold, dark, muddy madness. And here the tragedy takes place.

The show belongs to the narrative-theater genre. Through the testimony of lived live it becomes an imaginative and emotional performance.

Seventy years have passed since the concentration camps were closed, but the horror of what the Allies found lives on.

A powerful show that gets to the very heart and mind of the public, keeping alive the memory of the tragedy.

Tickets will be available soon