Exhibition opening: “The persecuted and survivors. They did not want us to live” 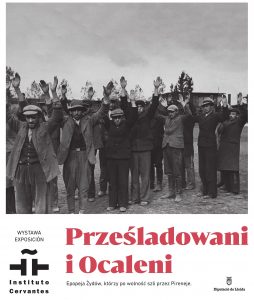 During WW2, thousands of Jews managed to reach Spain. They were running away from the persecutions and savagery of the Nazis. Most of them crossed the borders in the Pyrenees clandestinely, after a long and dramatic trek in snow and frosty weather. Despite its vague policy regarding Jews and close relations with Nazi Germany, Spain became a transit route for them. From there, they were embarking on their way to America or Palestine, which at the time was under British rule.

“The persecuted and survivors. They did not want us to live” was ordered by Diputación de Lleida and tells a story of people who found refuge in Spain. Leaving their previous lives behind, forced to forget their homes, cities… in order to be able to live in peace. It is also a story of anonymous and selfless people who helped them on their way to freedom.

Event organized in cooperation with Cervantes Institute in Warsaw