Brothers Marcin and Bartłomej Oleś, bassist and drummer, nicknamed the greatest treasure of the Polish jazz of the 21st century, Polish Jazz Performers of the Year 2016 (according to the board of JazzPRESS and RadioJAZZ.FM) are among the most creative artists of the Polish jazz scene. Both characterized by cosmic imagination and sensitivity, in their artistic quest, they explore not only jazz but broadly understood improv based on contemporary and ethnic music. They also compose music for theaters and movies. 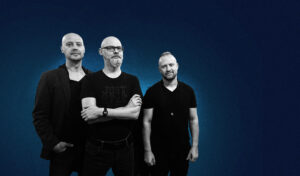 Their works often go beyond the boundaries of jazz; the brothers are more like pioneers discovering new territories in music. A clear confirmation of that is “Koptycus”, a project prepared specially for the festival, to which they invited Dominik Strycharski, an important figure on the Polish improv scene – flutist, vocalist, composer, improviser, and performer (as well as feature writer), who plays and composes modern jazz, contemporary and electronic music, post-hip-hop, noise, and different kinds of improvised music (in his own band Pulsarus).

The source of inspiration and the main point of reference for the amazing trio was the music of the Copts, one of the world’s oldest Christian communities. By finding and exploring the music codes of the first Christians and transliterating them into the contemporary language and aesthetics, the artists created a colorful, episodic history of the world of the ancient Eastern Churches, which, sometimes using the narrative schemes typical of ancient Greece, universal in our culture, speaks to us in the modern, frequently novel musical language.