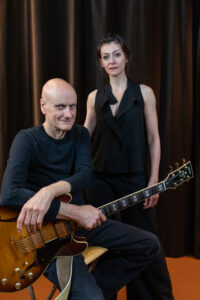 The guitarist and composer Francesco Bruno presents a new project that arises from the collaboration with the actress and singer Silvia Lorenzo. The project starts from a common desire to rediscover some of the most fascinating melodies that have become part of the musical tradition handed down from various countries of the Mediterranean basin and beyond, whose origins are still often unknown today.

Rediscovered simple melodies and lean verses that speak to us about love in its Infinite forms, of passions that know neither time nor geographical boundaries. The selected songs belong to the Italian, French, Sephardi, Israeli and Brazilian traditions. The project differs from a simple operation of musical archeology, as the melodic cells, extrapolated from their traditional harmonic context, serve as a starting point for Francesco Bruno to give life to real extended compositions projecting these traditional themes into the jazz language, that by definition, is born and handed down, renewing itself in a continuous evolution. A stylistic crossover in which Silvia Lorenzo’s voice and interpretative theatricality manages to excite and be the protagonist of this journey between past and present with indefinite boundaries and colors.

The ensemble sees the participation of the drummer Marco Rovinelli and the double bass player Andrea Colella, two of the most appreciated jazz musicians in Rome – Italy Francesco Bruno approaches again a melodic universe interpreted by a female voice, after having written in the 80s many songs that have become evergreen today for the Neapolitan singer Teresa de Sio. The CD will be released by the ALFAMUSIC label and presented in major Italian jazz festivals this year.