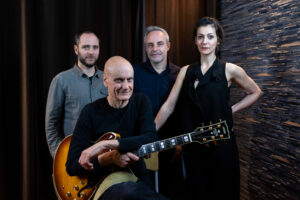 Francesco Bruno presents a concert with a selection of jazz standards, accompanied by two of the most popular Italian jazz players, the double bass player Andrea Colella and the drummer Marco Rovinelli. A journey through the classic jazz melodies that have crossed the ages inspiring generations of composers and players. The concert will alternate instrumental and vocal pieces, interpreted by the fascinating voice of the actress and singer Silvia Lorenzo.

Francesco Bruno is a guitar player and composer from Rome (Italy). He has released 10 albums as a leader, performing since 1987 in many Jazz Festivals in Italy and abroad with his ensemble. He performed in the 70s with jazz stars such as Don Cherry. In the 1980s Francesco wrote many hit songs that have become evergreens.

The Summer Stage of the Jewish Theater, 35 Senatorska St.