The well-known Ukrainian artist Natalia Kasyanchik (nee Utesheva) invites you to her premiere concert, which will include original Jewish music, and pieces by “the counts of the Klezmer world”, in Kasyanchik’s arrangement and rendition. During the concert, Natalia Kasyanchik (domra, vocals) will be joined by her invited guests, and other Ukrainian musicians and the music will be illustrated with visual series featuring pictures of the Polish artist Stefania Shaded. 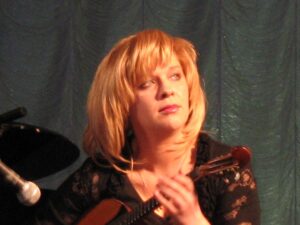 Natalia Kasyanchyk is not only a talented vocalist, instrumentalist, and arranger. Her comprehensive education (in 1999, she graduated from Donetsk State Musical Academy) covers orchestra conducting, stage performance, and teaching. In 2009, she received a doctorate from National Pedagogical Dragomanov University in Kyiv and conducts research into music folklore, music folklore arrangement, and the creative development of future music teachers. For many years, Kasyanchyk worked as a university teacher, and conducted creative development studios for students at various Ukrainian universities, while conducting traditional music workshops at international festivals, where she also performed.  In her country, she usually performed as a member of the “Podillja” orchestra, or in a duo with Olga Gansenko at the Vinnytsia Philharmonic.

The Summer Stage of the Jewish Theater, 35 Senatorska St.