“I am not here to be loved and admired but to act and love. It is not the obligation of those around me to help me, but it is my duty to care about the world, about the man” (Janusz Korczak, Memoir).

A doctor, tutor, journalist, writer, social activist, but first and foremost a just man, faithful to his principles until the very end. During the dramatic historic moments, during the Nazi occupation spent in Warsaw ghetto he opposed all prejudices and superstitions, listened to the other person with an unusual sensitivity and respect. He did not condemn but tried to understand, he did not distroy but rather tried to shape. Janusz Korczak was a man of dialog. Responsible, self-disciplined, he seeked and tried to find the goodness anywhere possible. When on 6 August 1942, along with the personnel and the children of the orphanage, he was sent to the Nazi concentration camp in Treblinka, he refused to use the offer to be set free. He stayed with his children until the end, faithful to his ideals.

Right after the war, in 1946, a few foster children saved from genocide, friends and former collaborators created a Committee for Commemorating Janusz Korczak. This is when the idea of a monument of the Old Doctor originated. Years have passed. In many places in Poland and around the world the memory of Janusz Korczak was kept in different forms. Despite passing a resolution, completion of a monument in Warsaw maintained in the realm of concepts.

Thanks to the generosity of private persons, gifts from artists and support of the Jewish Theatre in Warsaw, three concerts and three art auctions were organized in Warsaw, and the income fed the account dedicated to building Janusz Korczak’s monument. The auctioned pieces included works of many renowned artists such as: graphic art by Feliks Tuszyński, paintings by Józef Panfil, Moshe Kupferman, Jan Dobkowski, Józef Tchórzewski and Franciszek Maśluszczak as well as notes manuscripts of Krzysztof Komeda. On 20 November 1999, the first of the series of charitable concerts organized by Gołda Tencer was played. The evening ended with an art auction, carried out by the great tenor, Wiesław Ochman. In June 2000, a concert of “Jewish Street Songs” was given by the company of the Jewish Theatre and Gołda Tencer. The same year, another concert, after the completed third auction, was given by Wiesław Ochman and his guests: Magdalena Idzik, Aleksandra Stokłosa and Helena Christenko.

In September 2001 a Resolution on building and the location of the monument was passed, and International Competition on the design of Janusz Korczak monument was announced. The Jury, chaired by Professor Adam Myjak (Warsaw Academy of Fine Arts) and composed of: Professor Stanisław Wieczorek (Warsaw Academy of Fine Arts), Professor Marek Budzyński (Warsaw Academy of Fine Arts), Szymon Szurmiej (Director of the National Jewish Theatre in Warsaw) supported by councellors: Mark Web (Institute for Jewish Research NY) and Lena Benoualid (architect from Israel), qualified to the second stage six works from among thirty that were sent. The authors of the projects that were chosen were: Ewa Trafna, Zbigniew Wilma and Bohdan Chmielewski, Małgorzata Olkuska, Stefan Dousa, Marian Konieczny and Magdalena Walczak. In November 2002 the Jury decided to award two equal prizes to the projects prepared by: Magdalena Walczak and Zbigniew Wilma and Bohdan Chmielewski. In January 2003, Monument Building Committee chose a concept “Tree” designed by Bohdan Chmielewski and Zbigniew Wilma.

On 19 September 2003, in the western part of the square located on the northern side of the Palace of Culture and Science, the Mayor of Warsaw, Lech Kaczyński laid the foundation stone. In the presence of the gathered citizens of Warsaw, children and young people, assisted by the representatives of authorities and Monument Building Committee, the Cornerstone was signed by: the Mayor of Warsaw, Lech Kaczyński, Deputy Mayor of Warsaw, Andrzej Urbański, Gołda Tencer, Szymon Szurmiej, Professor Jadwiga Bińczycka, Ambassador of Israel to Poland, Professor Szewach Weiss, Professor Stanisław Wieczorek, Professor Adam Myjak, Professor Marek Budzyński, Marek Web, Lena Benoualid, Wiesław Ochman, Małgorzata Niezabitowska, Jerzy Kuberski, Hanna Pałuba, Izabela Teodorkiewicz, Ryszard Wyszyński, Tomasz Steckiewicz and Krystyna Zarzycka. The celebration included a show “Give the Childhood to the Children” addressed at foster children of the orphanages and pupils from the schools named after Janusz Korczak. The little participants of the gathering took a ride on historic vehicles to the City Hall, where the Mayor of Warsaw gave a symbolic power over the city to the child king  Mathew I.

On 1 June 2006, a long awaited unveiling of the monument took place. Honorary Patronage over the celebration was given by the President of Poland, Lech Kaczyński. Ceremony was attended by children and young people from the Korczak centers around Poland. A few living pupils of Janusz Korczak came from Poland and abroad. Official speeches were given by: the President of Poland, Lech Kaczyński, President of the Polish Society of Janusz Korczak, Professor Jadwiga Bińczycka, Rabbi Michael Schudrich and the General Director of Shalom Foundation, Gołda Tencer. After the President of Poland, Lech Kaczyński, Stanisław Wieczorek, Nina Terentiew and Marek Groński were awarded with Commemorative Medals, the monument of the Old Doctor was unveiled. The ceremony was marked by a show directed by Dawid Szurmiej, based on “Korczak” musical, the title part was played by an accomplished actor, Henryk Talar. The applauses of the many guests kept on going. Chanting procession of children and persons singing: “Do słońca wzniesiona dumnie twarz,/Oczy wpatrzone w niebo bez skaz.?/Ślad naszych ojców, to jest nasz ślad, /Tak tańczy ogniw nasza brać,/ By trwać, by trwać, by trwać…” ended the very emotional gala.

Janusz Korczak monument was erected at the place, from which the Old Doctor begun the journey with his foster kids to Umschlagplatz. Seven arm tree protects the memory of the noble educator and his Jewish pupils. Shalom Foundation wishes to thank all benefactors in Poland and abroad, artists and authorities of the Capital City of Warsaw, thanks to whom erection of the monument was possible. The names of the benefactors are an integral part of the monument. 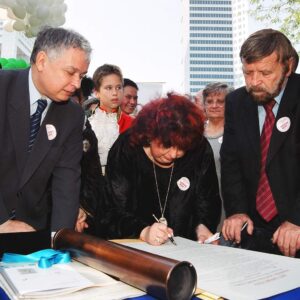 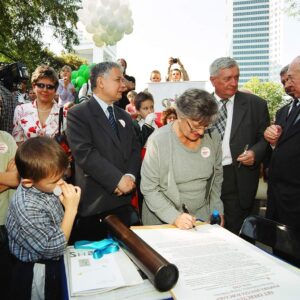 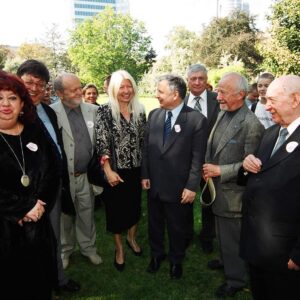 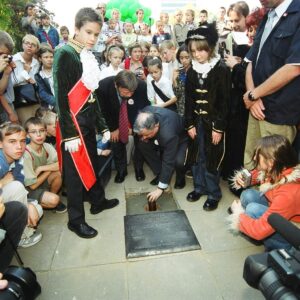 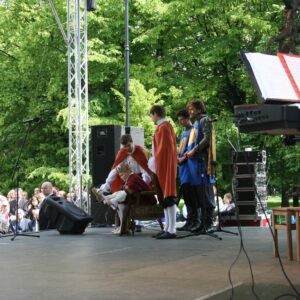