OLGA AVIGAIL recital |PL/IL|: “SONGS OF ISRAEL FROM THE BIBLICAL TIMES UNTIL TODAY” 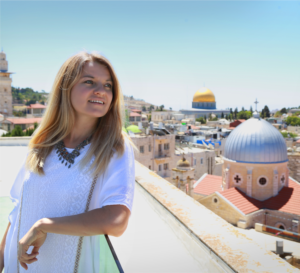 This concert promoting the new album of the Polish-Israeli singer Olga Avigail is an invitation to a fascinating musical journey through Israel, both the biblical one and the contemporary one. The singer, the researcher of Polish-Jewish music, internationally recognized as one of the leading artists connected with the revival of the Yiddish music in Poland, communicates the geographical and cultural diversity of the Land of Israel. This time, she does it with the help of Hebrew songs, both traditional and new compositions.

The journey begins in Eilat, on the southern border of Israel, and ends in Rosh Hanikra, its northwestern tip. It covers the primal sounds of the Negev Desert, the holy tones of Jerusalem, and the sweet melodies of the Sea of ​​Galilee. On the way, the audience will meet with the famous biblical figures, such as King David or the prophetess Miriam, as well as contemporary Israeli artists, the poet Rachel or Nomi Szemer.

The songs are mostly performed in Hebrew, but they evoke the sounds of other cultures and religions, such as Arabic, European, Armenian, Bedouin, or Druze. This project has brought together musicians of various origins who played 31 instruments to show the multitude of musical styles in the Israeli cultural melting pot, where the song of the desert caravan meets jazz, and the sounds of ancient santura meet bossa nova. The music will be accompanied by images of Israeli landscapes and a handful of stories.

The Summer Stage of the Jewish Theatre, 35 Senatorska St.