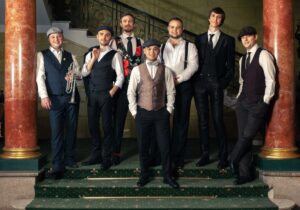 “In Odessa, people find together. In Odessa they all will laugh and sing.” Kommuna Lux validate these words from an old couplet, using their own style called “Odessa Gangsta Folk”, which stands for thrilling klezmer music and common gangster folk songs from their hometown.  About the Odessites, their great tolerance, an easy-going lifestyle and a very special sense of humor have always been mentioned. The metropolis is world-famous for its significant Jewish life and for being the birthplace of Russian chanson as an independent genre. These songs were created over 100 years ago in Odessa, and in the course of the later decades, despite many bans, this beloved music reached the last corner of the Soviet Union. This bohemian and nostalgic temper from the Ukrainian Black Sea coast is now set to a timeless level by the vibrant performances of the lovely singer Bagrat Tsurkan and his charming musicians, playing these joyful songs and melodies from Odessa and all Eastern Europe in spiced up arrangements.

Years ago the gangsters making music performed noisy flash mobs at the famous city fish market called Privoz, in the old wooden tram line number 5, on the Primorsky Boulevard promenade and on rusty rocking boats on the popular Lustdorf beach, causing perplexed masses of Odessites. In addition to the band’s presence on the largest festivals in Ukraine such as the Koktebel Jazz Festival, Kyiv Klezmer Fest, Atlas Weekend or Woodstock Ukraine, the band received cheering applause from the audience globally at the Fürth International Klezmer Festival, the Summer Festival of Cultures in Stuttgart or the transVOCALE in Frankfurt/Oder, as well as at the Master Theater in New York or at the Rodeo Club in Haifa. Another triumph came in 2018: the music collective won the “Eisernen Eversteiner”, Germany’s only European folk music prize, which is awarded annually at the Folkherbst festival in the city of Plauen.

The atmosphere at the concerts of Kommuna Lux is absolutely unique – there is a maritime aura in the air, as well as the typical timeless humor of the Ukrainian Black Sea coast. The Jewish saying “There is always an alive fish“ in Odessa manner characterizes the vitalising show of the band which is definitely full of shaking rhythms, refreshing anarchy and plenty of lust for life!