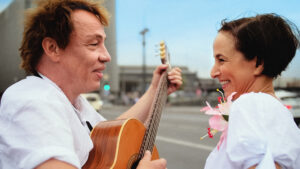 As an actress, Sharon Brauner  has certainly made her contribution to the moving pictures in very different genres, but it is with song that her heart lies, in particular Yiddish music. Is this a return to her roots or a new start?

“Neither, nor”, Sharon Brauner replied. “I was exposed to the language and music when I was a child. My father spoke Yiddish when he was playing cards with friends.  To me it sounded a little like German, but different. It was like a secret language.” And therefore exciting. By comparison, the songs came across as very traditional, “to put it another way, they didn’t exactly sound so cool. And then I heard the Barry Sisters f.e. – who made Swing adaptations of Yiddish songs – and all of a sudden they sounded really sexy.”

My roots lie more in the multicultural Berlin and I am as familiar with street kids as I am with some weird figures from Berlin’s cultural scene.” Things were different in her family, “of course I learned a great deal from my parents – who survived the Holocaust – about history. I’ve spent a lot of time looking at that.”

Both, Sharon Brauner & Karsten Troyke, grew up in Berlin, she in the west and he in East Berlin. He is a singer, speaker, actor, and songwriter with a strangely husky voice. He is well-known at home and abroad above all for his rendering of Yidish songs, which he learned among the circles of holocaust survivers already as a child. From a family, persecuted by the Nazis, the past was present. Allthough coming from this side of the story, he soon discovered his love for Yiddish cabaret and tango by entering the stage.

The two singers decided after many years on tour, each one alone, to put the power together as a duo in 2015. An evening that restores the appreciation and glory of the lost songs of “Yiddish Berlin”, great World songs of the Yiddish urban culture and more. An entertaining show that gives you something for the heart, the soul, sadness mixed with laughing. L‘Chaim 🙂

The Preßburger Klezmer Band is a unique musical body which has attracted quite a number of fans since it was established in 1995. It is the first Slovak band to take its inspiration from the emotive dance music of Central and Eastern Europe known as klezmer. At the same time, it is also the highest rated among similar bands within the central Europe. The band serves up an energetic musical cocktail: a charming mix of Jewish, Slovak, Balkan and Oriental music, complemented by Gypsy folk elements – all combined with a unique essence of contemporary styles, including jazz, reggae and Latino.

The Pressburger Klezmer Band is a well-established part of the European World music scene. In the last years the band co-operated with such klezmer stars as Lorin Sklamberg, Frank London, Merlin Shepherd, Steve Weintraub, Sasha Lurje etc. The band’s repertoire offers a captivating interpretation of unique and well-known songs — usually sung in Yiddish, but also in Slovak, Hungarian, English and Balkan languages — expressing enthralling emotion and a “music-to-dance to” quality. To date, the Preßburger Klezmer Band has released eight albums and participated in several film, theatre and other projects. The album „Tants mit mir” was awarded with Radio_HEAD AWARD for the best Slovak album in 2012 in category World/Folk. In coming days the band releases its new album „Baladen”.

A unique klezmer band from Slovakia, participating in the renewal of klezmer music,a blends the style of klezmer with modern styles: jazz, reggae and world music. An original compilation of sound ranging from the Balkan region, through the Mediterranean, up to the sound emerging from Bratislava’s old Jewish district. Preßburger Klezmer Band plays klezmer for people worldwide and invites them to dance. [Review from a concert held at the Festival Les Nuits Européennes, Strasbourg (F)]

This event will also be broadcast on-line – details soon