Jewish writers reading club – Masters read: fragments of the novel by Sholem Aleichem “From the market” interpreted by MIROSŁAW ZBROJEWICZ

The novel was translated by Michał Friedman 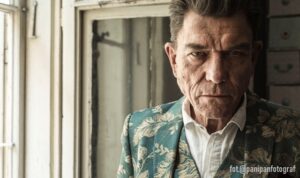 Mirosław Zbrojewicz – a well-known and well-liked Polish actor, who gained popularity mainly for his character parts. Even though, after his 1981 graduation from the National Academy of Dramatic Art, he spent long years on stages of theaters across Poland as well as playing in TV dramas, it was the cinema that appreciated him most.  Zbrojewicz appeared in over a hundred roles in celebrated cinema productions, including many iconic comedies: Olaf Lubaszenko’s “Boys Don’t Cry”, „E=mc²”, and „Sztos 2” In recent years, he appeared in Tomasz Wasilewski’s “Floating Skyscrapers” and Jerzy Skolimowski’s “11 minutes”.

Free entry upon confirmation between 8 and 24 August at warschau-kf@bmeia.gv.at; seats are not numbered