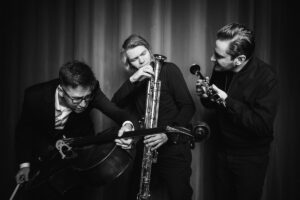 BASTARDA Founded by clarinettist, improviser and composer Paweł Szamburski in conjunction with two other
unconventional musicians: Tomasz Pokrzywiński (cello) and Michał Górczyński (contrabass clarinet). This unusualcombination of instruments creates a unique, completely new timbre, which has become the characteristic feature of Bastarda’s style. The Trio has been praised for creating their own musical language, which has become the tool for reinterpreting early music. Chorales, motets and litanies are merely starting points for improvisation and new compositions; rich counterpoint of early polyphony implodes into minimalism; the “alla bastarda” method finds its way in a new context. That way musical traditions of the past morph into A modern, original and personal artistic voice.

Paweł Szamburski, Tomasz Pokrzywiński, and Michał Górczyński – coming from different musical backgrounds – are interested in demonstrating how early music can sound today, filtered through their personal and contemporary musical experiences. The group’s members share their knowledge with audiences from all around the world and also scholars; taking part in project meetings and debates, as well as playing live improvised music inspired by the ongoing research of the early music period. This creative and brave approach to early music has not gone unnoticed. After releasing their first album, Bastarda was invited to become an official partner of the international research project HERA „Sound Memories. The Musical Past in Late-Medieval and Early Modern Europe” conducted by leading European musicologists. Thanks to that collaboration the ensemble has taken part in numerous conferences, project meetings and debates, and also performed to great critical acclaim in front of scholarly early music audiences. These concerts have been described as jazz-like experiences, bringing a thrilling freshness and unpredictability to the medieval and renaissance repertoire.

Bastarda takes us on another musical journey, this time delving into Hasidic Nigunim. These mystical Jewish songs, almost always sung without lyrics, originated in the Hasidic revival movement of the 18th century and often drew from local music patterns and traditions. Ecstatic dancing and singing of nigunim was a way for the Hasidim to enter “the chamber of God”. Drawing mainly from the legacy of the Modzitz dynasty, as well as from the collection of Hasidic songs discovered by the musicologist Moshe Bieregowski, Bastarda brings out the beauty of Jewish melodies, filtering them through its unique and mature artistic language. The non-verbal nature of the Hasidic songs allows for free improvisation and a more personal form of expression, while their internal narrative force is just as inspiring. Without the use of words, they tell stories of joy and sorrow, of life lived in its full sensual spectrum, therefore embodying the essence of Hasidism, which always fluctuated between waiting for the end of the world and a joyful, almost ecstatic affirmation of life. The mystical Hasidic compositions create a space in which the musicians move with ease, elegance, understanding and tenderness, creating cutting-edge, outstanding