This perfomance will be presented in German, Polish and Yiddish with Polish subtitles 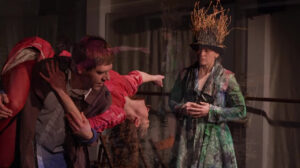 A theatre adaptation of “Opowiadanie z zabitego miasteczka – Tale from a killed town” written by a Jewish – Polish author, who wrote in Polish and Yiddish, was translated into Hebrew and died in1980 in Israel. On September 1st 2018, the anniversary of the German attack against Poland, the book premier of the first translationin to German of one of Kalman Segals works happened in Sanok (PL): a volume of stories “Erzählungen aus dem toten Städtchen”, translated by Agnieszka Jankowska, Austeria 2018.

This gave the reason of a first staging for Polish speaking audience, with only two of the actresses: Yael Schüler and Joanna Sarnecka, sometimes in a conversation, sometimes acting in parallel and synchronous in Polish and German language, partially playing with the audience as their partner. More than three years later a complete staging for international audience grew out of this first version, with all four characters of the story embodied:

The mother “Mame” talking in Yiddish, Alexander and Regina speaking German and the richest Jew in town, who is very misery in the end as te only surviver Süsskind, uttering words in Polish. Additionally the language of dance (expressive dance, Tango – Argentino and Butoh) plays an important role in this staging.

Three years later – and the world has changed. Because of the pandemic and its combat some people lost their connection to one another, while others came closer together. Physical vicinity was forbiddenin stretches.Maybe the lack of real human encounters and vicinity, of direct interpersonal exchange has made their importance and meaning more clear to us?

We can find this subject also in Kalman Segals story and this aspect is emphasized by the staging: The mysterious and fateful of human encounters, which are again and again violently disturbed from the outside. In this case throughviolencein it’s most concrete form: war that is experienced by the protagonist Alexander exactly where it is happening now again: Kiew. Finally violenceand crueltyevenpenetratesthe private home in the form of a German Gestapo man, who puts an end to life.

Kalman Segal’s report, here told by Alexander, is autobiographical. It is about processing the trauma, caused by the horrors of WW II and the Shoah.But this story and it’s stagingcontains also the joy about what has been before, like a longing cry for life.

The colourful painted costumesstand in opposition to the bizarre, pointed forms of the chaotic structure of many stacked chairs, who remind us sometimes of the turmoil of life, sometimes of the ruins of war.

It is all about the most important thing in life… that happens between Alexander, atraveling salesman, who is actually a student and Regina, atailor apprentice. It is too fragile and in the same time too strong, to be spoken out, but it is holding them together throughout war, expulsion and being separatedfrom one another. And if you have lost someone violently, you are carrying her or himwith you forever… 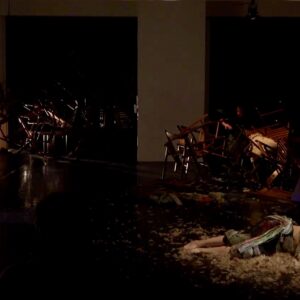 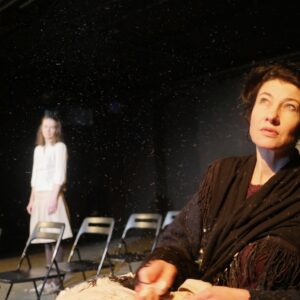 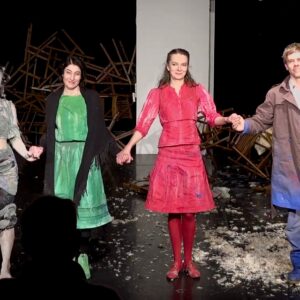 Born in 1975–cultureanthropologist, story teller of the group Opowieści z Walizki www.opowiescizwalizki.pl, scholarship holderof the Polishministryfor culture and national heritage. She is author of the book “Dziennik uciekiniera”, performer and actress in thePolishfringe theater. As such she made her debut with the production”Czarna Mańka, the queen of the suburbs” (directed by Dariusz Kunowski). She creates performances with ensembles, who include groups, that are in danger to be excluded: People with handicaps, seniors, citizens of small villages (in Poland), Romas. Butohis her dance, which she has learned mainly from Atsushi Takenouchi. She also participatedin workshops of the following teachers: Ko Murobushi, Daisuke Yoshimoto, Tetsuro Fokuhara, Maya Dunsky. As president of the cultural foundation “Walizka”,she organized the festivity for Kalman Segal’s 100th birthday. She played in the dramatical adaptation of “Opowiadanie z zabitego miasteczka” together with Yael Schüler at the book premier of its German translation in Sanok on September 1st 2018.

Yiddish scholar and cultural activist; actress and visual artist. Numerous research contributions on Yiddish; translations from and into Yiddish. She completed her PhD Studies in Yiddish at the University of Warsaw. She studied art history, philosophy, literature and visual arts at the universities of Marburg, Salzburg, Vienna and Warsaw. In addition to her academic work, she was a member of the Jewish Ester Rachel and Ida Kamińska Theater in Warsaw as a trained actress, performing in international theater productions and with her own programs in Yiddish, Polish and German; her work as a visual artist has been presented at numerous exhibitions in Europe, Israel, the USA and Canada.On both a scholarly and artistic level, Anna Rozenfeld has made a living encounter with Yiddish culture a focus of her life and profession. This included her moderation and contributions to “Naye Khvalyes”, the Yiddish program of the Polish Radio, and her participation in international theater, music and film productions. With her workshops and projects such as the initiative ייִדיש לעבט (engl. Yiddish lives) and with her translations from Yiddish, she wants to contribute to keeping the rich heritage of Yiddish culture alive and preserving it in the present. In this sense, she also understands her involvement in various institutions and international networks; she is a board member of the Polish Society for Yiddish Studies, a member of the Association of Jewish Studies and the World Union of Jewish Studies.

This perfomance will be presented in German, Polish and Yiddish with Polish subtitles

The show will be broadcast on Singer’s Warsaw Festival’s FB page: HERE