Music walk around the streets of Warsaw

In a Klezmer tune, we will be taken around Jewish past of the streets and past stories of Warsaw residents by Mirosław Kuźniak, Marcin Maroszek, Kamil Siciak accompanied by violin, accordion, and percussion.

This year, we will meet on the green square named after Alfons Grotowski, a senior engineer of the city of Warsaw who managed the construction of municipal water piping system (according to the design made by Wiliam H. Lindley). Here, we will take a look at Lindley’s Filtry (Filters) and opposite, the oldest operating Polish orphanage – Children Home no. 15 named after Father G.P. Baudouin which, during the war, gave shelter to lost children and orphans, including Jewish children; the building of the Water and Sewage System Directorate, construction of which took several lives and the Tourist House for pre-war tours.

From that place, we will move along the buildings of the Infant Jesus Clinical Hospital, during the war turmoil, this was the place of secret education, a shelter for underground soldiers and Jewish people. Then, we will continue to Nowogrodzka Street, towards Roma Musical Theatre, a place that was changed in the 1940s into a casino, entertainment place for German soldiers and officials, to reach the townhouse of the construction entrepreneur, Izaak Rotberg. Taking  Emilii Plater Street, we will walk to Warsaw’s only pre-war Nożyk Synagogue. Finally, we will stop around the former building of the Jewish Theatre and Shalom Foundation, right on time to join the yearly Shabbat dinner, Shabbat Shalom. 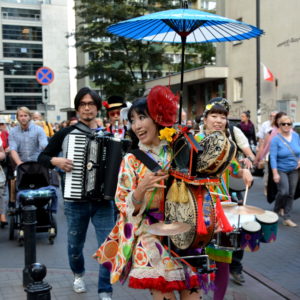 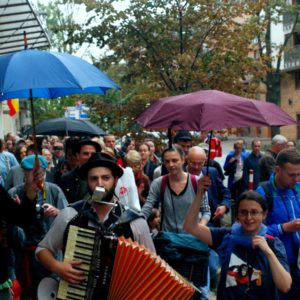 Co-organized by the Association MY