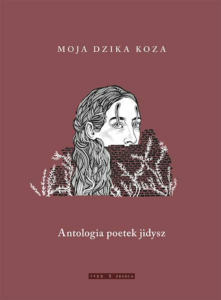 This meeting is part of the series “Jewish Literary Salon” and will be attended by the co-authors of the anthology Bella Szwarcman-Czarnota, Joanna Lisek and the illustrator Aleksandra Czudżak

Selected poems will be read by Sylwia Najah

The presented book is the result of more than ten years of work of three researchers and translators of Yiddish literature: Joanna Lisek, Bella Szwarcman-Czarnota, and Karolina Szymaniak. It features 270 texts written between the 16th and 21st century by 50 female authors and has been divided into 17 parts ordered according to the subjects and translated by several translators. It comes with an introduction, dictionary, and biographies of the writers and translators. It is the first so extensive anthology of the Yiddish poetry published in Poland. It covers both old texts as well as modern and contemporary ones. It offers a look into the Yiddish works – from the perspective of the gender studies and more extensively – as part of the studies and surveys into the culture in general. The book has been illustrated by Aleksandra Czudżak and her works are yet another layer, a modern visual interpretation and dialog with the texts written by the female poets.