One of the best film scores composers, Bronisław Kaper was the music director of the famous Hollywood film studio Metro-Goldwyn-Mayer (Academy Award for the movie “Lili” and a long list of world hits). His story will be told by Andrzej Krakowski, the author of the famous “Pollywood: How We Created Hollywood,” “Pollywood II: Fugitives in Paradise” and “The World Through The Eye of a Screenwriter.” 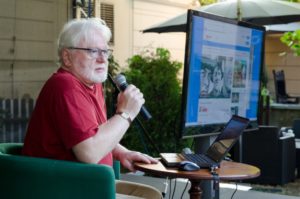 Andrzej Krakowski – director, screenwriter, movie producer, teacher, writer, and cartoonist; professor at the City University of New York and holder of Ph.D. in film art. Productions he directed won numerous awards, he is the author of screenplays for 18 movies and several books, including the famous “Pollywood: How Did We Create Hollywood,” “Pollywood II: Runners In Paradise,” and “The World Through The Eye of a Screenwriter.”