Meeting with the comic book authors: Michał Arkusiński and Maciej Cholewiński and Joanna Podolska, Director of Marek Edelman Dialog Center in Łódź, who will host the meeting and the interview. 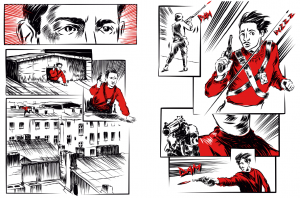 Marek Edelman’s year brought us publishing of the graphic novel presenting the life of Marek Edelman, a Pole, a Jew, bundist, insurgent, doctor, opposition and social activist, politician, a man who always tried to fight evil and support the weak ones. Published by Łódź’s Dialog Center, the book entitled “Edelman” features original photographs presenting both the biography as well as complicated reality witnessed by the book’s main character. The graphic novel shows Marek Edelman as a man who many times had to fight for freedom for himself and others. We also get to know him as the activist of the anti-communist democratic opposition, in which he was involved and engaged despite potential consequences. In the end, he is the one who made it see free Poland and was never silent engaging in humanitarian help and solving new conflicts, such as the one in former Yugoslavia or Kosovo.

The authors of the graphic novel are a team of experienced artists: Michał Arkusiński – graphic artist and Maciej Cholewiński – scriptwriter. The book comes with endnotes and biography.

It signals the most important moments in Marek Edelman’s life, telling the story of his life and highlighting what he found most important, what drove him and what he tells us today.