In addition to concerts, historical walks, and literary meetings, the 19th edition of the Jewish Culture Festival Singer’s Warsaw will also include accompanying events, i.e. performances by the Jewish Theater. The audience will be offered the opportunity to see the shows that premiered last season, such as “Yentl” with live music, much appreciated by reviewers and rewarded with standing ovations by the audience. The phenomenal “Madagascar” awarded for best text written by Magdalena Drab. We also invite everyone to see a spectacular performance, the first one of this kind, “Pif Paf w piach” on September 1st.

Singer’s Warsaw will again present all Festival’s sounds from August 27th until September 4th. On behalf of the director and creator of the Festival, Gołda Tencer, we invite and welcome everyone.

“MADAGASCAR” – August 20-21, the Small Stage of the Jewish Theatre 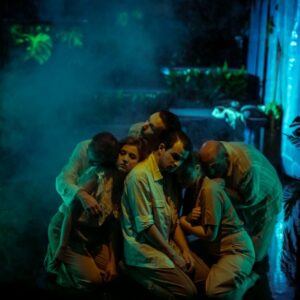 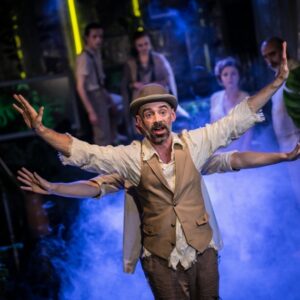 A metaphysical horror show inspired by the fate of the outstanding Poles with a Jewish background. The show was made in cooperation with Papahema Theater. Madagascar in this show directed by Gosia Dębska is an imagined afterworld for those with whom we don’t know what to do. It is a space of exile for souls of unknown origin, convoluted past, or suspicious features. This is where we meet Stanislaw Lem, Helena Rubinstein, Julian Tuwim, Helena Deutsch, Samuel Goldwyn, Ludwik Zamenhof. They are watched over by a Jewish foremother. The castaways struggle for survival in an absurd, sometimes grotesque way, trying to escape the island. 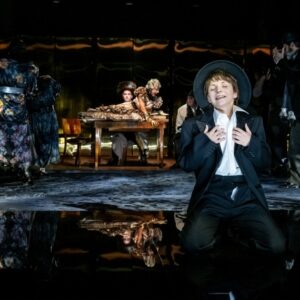 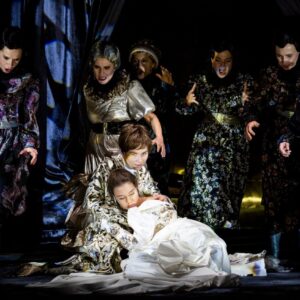 A contemporary view of Singer’s text was made famous by the film directed and starring Barbra Streisand. The story of a Yentl girl who became a yeshiva student named Anszel is a poignant description of the struggle for human freedom. “I wanted to be free, now I have what I want”, sings Yentl in Robert Talarczyk’s stage show. This declaration sounds bitter but has the strength and determination of a person who not only wants to change herself but also the world, enshrined in the traditions and habits of others. 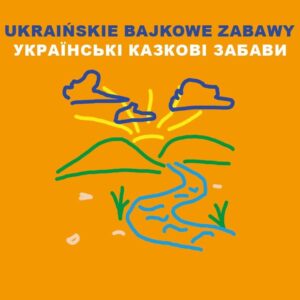 This interactive performance for children was conceived by the director of the Jewish Theater, Gołda Tencer, and prepared by two Ukrainian artists: Alla Kosach-Denysiuk, an actress and director from the Jewish Theater in Kyiv, and Nataliia Utesheva, an artist from the Academic Song and Dance Ensemble “Podillya” of the Vinnytsia Philharmonic, who is responsible for the musical setting of the show. 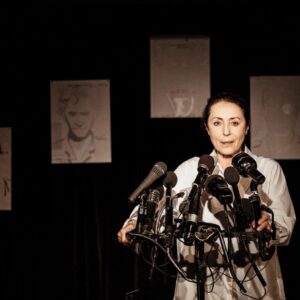 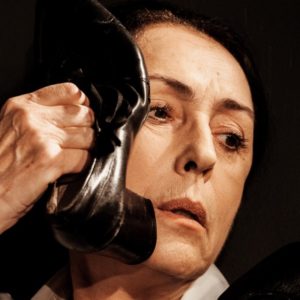 American “one-woman show” about Israel’s iron lady, the prime minister Golda Meir with Ernestyna Winnicka playing the main part and directed by Marta Miłoszewska. The play not only tells the story of the life of Golda Meir, her journey from Milwaukee to becoming a Prime Minister of Israel but also introduces and explains one of the most fascinating careers of the 20th century. But above all, it is a story about the emancipation of a woman who decided to go against the world of men.

PERFORMATIVE READING adapted for stage and directed by Karolina Kirsz, the Small Stage of the Jewish Theater:

“Has anyone seen Hedwig Klein?” written by Marta Szamani Yacoub was awarded by the Minister of Culture and National Heritage in the 1st edition of Szymon Szurmiej International Competition for Contemporary Drama on Jewish Themes.

Written by the Israeli scriptwriter and writer, Anat Gov, is a story of tough friendship and complicated relationships between three women who meet again after years. 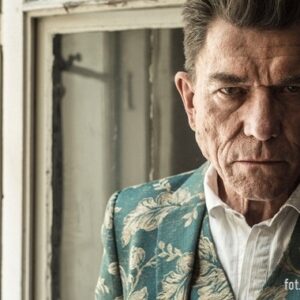 Fragments of the novel by Sholem Aleichem “From the market” interpreted by Mirosław Zbrojewicz – 04.09.

A theatrical adaptation of the collection “A Story from a Killed Town”, written by a Jewish-Polish author, who wrote in Polish and Yiddish, Kalman Segal. Based on the idea of Anna Rozenfeld. – The author invited us to a world that is no longer there but is only in his memory.

“HITS OF THE JEWISH CABARET” – September 2nd, the Summer Stage of the Jewish Theater 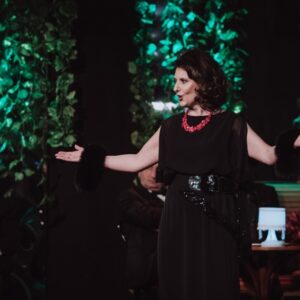 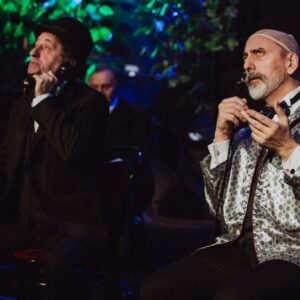 We invite our audience to a unique encounter with the biggest hits of Warsaw’s pre-war cabaret stages, including one of the most famous Polish sketches by Konrad Tom “Sęk”. The show is vibrant with humor and Jewish lyricism, rich in skits and songs – hits to the texts of Tuwim, Jurandot, or Hemar. The evening will also include the moving song “Majn Yiddish mame” in the interpretation of Gołda Tencer, the show’s director.

“IN MAMA SONIA’S KITCHEN” –  September 3rd, music performance on the Summer Stage of the Jewish Theatre

This is a mandatory item on Singer’s Warsaw Festival’s agenda. The Director of the Jewish Theater, Gołda Tencer, together with her brother, Janusz, and her son, David, and friends, take us on a journey to the past, to a pre-war Jewish world that no longer exists. But it is revived in such memories and musical stories.

“DER SZTUREM. CWISZYN / THE TEMPEST. BETWEEN”  – September 2-3, the Small Stage of the Jewish Theatre

The performance “Pif Paf in piach” is a theatrical meeting with unusual characters from the Warsaw Ghetto in the nooks and crannies of the three-story building of Reduta Bankowa.

– We are organizing a huge performance in Reduta Banku Polskiego. It is an amazing story told on three floors that in total take 1,200 meters. There will be about fifty actors from the Jewish Theater, theater school students, and children”, said Gołda Tencer, director of the performance, on Polish Radio 24. – Warsaw Ghetto kept living. – Warsaw Ghetto kept dancing. Warsaw Ghetto kept laughing. Before death came knocking, the Ghetto was full of life, human passions, and the will for survival. The Jewish quarter hosted about 60 theaters, cabarets, revues, common rooms and cafes, and restaurants offering their artistic programs, where people tried to forget the daily nightmare of the surrounding world. This is where the artists, writers, poets, musicians, singers created, actors played… Among the most famous were Wladyslaw Szpilman, Jerzy Jurandot, Stefania Grodzienska or Wiera Gran, but there were also many, many others… Meet them. We will take you on a walk through the three-story building of Reduta Bankowa, where unusual characters, shadows of a world that was destroyed lurk in the nooks and crannies”, invites Gołda Tencer, the director of the Jewish Theater, and the originator, scriptwriter, and director of the performance.

Singer’s Warsaw Festival project has been financed by:

The Capital City of Warsaw, Minister of Culture and National Heritage from the Culture Promotion Fund under the program “Music” implemented by the National Institute of Music and Dance, Minister of Interior and Administration, Polish-German Cooperation Foundation, the Embassy of Israel in Poland, Italian Institute in Poland