The International Holocaust Remembrance Day will be commemorated for the 17th time on 27 January 2022. This year’s events, organised under the honorary auspices of the President of Warsaw Rafał Trzaskowski, will begin with the El Malei Rachamim prayer at the Monument of the Ghetto Heroes in Warsaw. As part of the events, citizens of Warsaw will light candles in their windows, and an empty tram marked with the Star of David will travel the streets of Warsaw. The Ester Rachel and Ida Kamińska Jewish Theatre has prepared a unique event: a performance entitled “Pif paf in piach”, which is a theatrical meeting with personalities of Warsaw’s ghetto taking place in the nooks and crannies of a three-storey building of Reduta Bankowa at 10 Bielańska Street in Warsaw. The event has been inspired by its directress: Gołda Tencer.

The International Holocaust Remembrance Day was established on 1 November 2005 by the General Assembly of the United Nations. The chosen date was 27 January, which is the anniversary of the liberation of the concentration camp in Auschwitz-Birkenau that took place in 1945. The day was established not only to commemorate the people murdered during WW2 by the Nazi Germany, but also to express a clear objection to not recognising the Holocaust as a historical fact. In its resolution, the General Assembly of the United Nations also called for action to encourage all nations to educate their people about the Holocaust and to keep the memory alive so that the events could serve as a warning against hate, racism and prejudice. 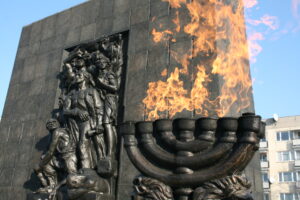 (Due to the Covid-19 epidemic the show has been postponed)

In the framework of the commemoration, the Ester Rachel and Ida Kamińska Jewish Theatre – the Yiddish Culture Centre invites everyone to attend a performance entitled “PIF PAF IN PIACH” directed by Gołda Tencer in cooperation with Karolina Kirsz, based on the scripts created by

The ghetto in Warsaw lived. The ghetto in Warsaw danced. The ghetto in Warsaw laughed. All this before death came to take the lives, the desires and the will of survival of its citizens. There were around 60 theatres, cabarets, variety shows, clubhouses, cafes and restaurants in the Jewish quarter, each of which presented its own artistic repertoire. These were the places where people were trying to forget about the everyday nightmare of the surrounding world. These places were full of artists, writers, poets, musicians, singers and actors: Władysław Szpilman, Jerzy Jurandot, Stefania Grodzieńska or Wiera Gran, to name just a few. We invite you to meet them all while taking a walk in the three-storey building of Reduta Bankowa, in whose nooks and crannies you will find the extraordinary personalities and the shadows of the world that was destroyed by the Holocaust, says Gołda Tencer, the manager of the Jewish Theatre and the initiator, playwright and directress of the performance.

The Light of Remembrance

On this day, we would like to bring back the shadows of the people murdered in ghettoes and camps. The symbol of the remembrance will be a lit candle. We ask everyone to light a candle in their window at 6 p.m. on 27 January in order to commemorate the Holocaust Victims, encourages Gołda Tencer.  It is everyone’s duty to ensure that the Light of Remembrance is never extinguished in our minds.

We invite everyone to join in the commemoration of the Holocaust Victims at 6 p.m. on 27 January by lighting a candle in their window. The Light of Remembrance can also be lit in the Internet by means od the Facebook platform. To do this, please visit the Facebook profile of Shalom Foundation (https://www.facebook.com/fundacja.shalom), download a photograph of a candle in the window and post it on your wall.

On 27 January, between 12 a.m. and 6 p.m., as every year, a historic tram marked with the Star of David will travel the streets of Warsaw. The empty vehicle will symbolise the tram that operated in Warsaw’s ghetto. Its aim is to remind the citizens of the capital about their Jewish neighbours who were murdered in concentration camps and ghettoes during WW2. The tram will travel along the following route: pl. Narutowicza – Marszałkowska – Stawki – Popiełuszki – Metro Marymont – Okopowa, pl. Zawiszy – pl. Narutowicza. 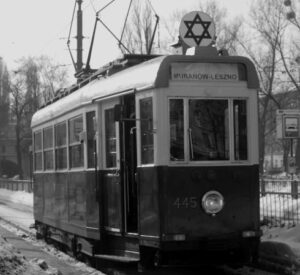 the President of the Capital City of Warsaw Rafał Trzaskowski