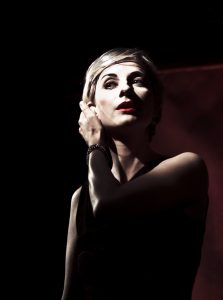 In Hebrew, “Tehora” means “clean.” It is a piercing musical story about war, loss, hope, love, and forgiveness. Composed of songs written by Jewish composers and writers that will be sung in German, Yiddish, and Hebrew. Tehorah project is also a historical and poetic portrayal that gives hope for the peace between the nations. It premiered in Carnegie Hall in New York.

Adrienne Haan, announced by the Wolf Entertainment Guide in New York “The First Lady of the Cabaret” and by the Huffington Post “the highest class artist,” today, she is one of the hottest singers, writers, and concert and cabaret producers. She has received multiple awards, gives concerts around the world presenting a diverse repertoire of the 1920s and 1930s music. Her specialties include chanson, jazz, blues, klezmer, and Broadway music, she also performs Hebrew and international songs. Invited to many festivals, her recent performances include concerts in the USA, Europe, Australia, China, Israel, Turkey, and South America.

Benjamin Schaefer studied jazz piano and the art of composing in Cologne. He was a member of the German Youth Jazz Orchestra (BuJazzO). The concert routes took him to 26 countries on four continents. With three formations he founded, he gave hundreds of concerts in clubs, during festivals, and released nine albums. In addition to playing and composing, he also teaches jazz piano in the conservatorium in Cologne.

This event takes place in the context of the Luxembourg presidency 2019-2020 of the International Holocaust Remembrance Alliance (IHRA). It is sponsored by the Luxembourgeoise pour la Mémoire de la Shoah Foundation, Luxembourg’s Ministry of Culture and the Embassy of Luxembourg in Warsaw

The concert is under Honorary Patronage of the Ambassador of the Grand Duchy of Luxembourg to the Republic of Poland, H.E. Conrad Bruch