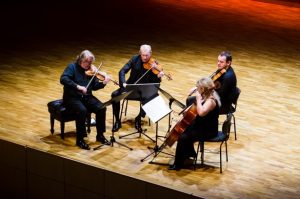 Compositions are written by Polish artists with a Jewish background who worked outside of Poland. Two of them, string quartets composed by Waghalter and Rathaus, are part of the latest album recorded by Polish String Quartet Berlin, which will soon be released as part of the series Poland Abroad in Berlin.

Ignacy Waghalter was born in Warsaw. After graduating from Berlin’s Royal Music Academy, he worked as a conductor, pianist, and composer. In 1917, he opened Deutsche Opernhaus – the famous Deutsche Oper Berlin. He was the director of the opera house in Riga and later the head of the New York Philharmonic. His compositions include operas (all focus on Polish subjects), symphonies, concerts, and chamber music. After the Nazis gained power, he emigrated to the USA, where he died, in New York in 1946.

Karol Rathaus was born in Radom. He studied in Vienna and Berlin with Franz Schrecker. In the 1920s, he was a very popular composer, writing also a large number of film scores. In 1933, he left for the USA where he was teaching the art of composing at Queens College in New York.

Szymon Laks was born in Warsaw. He studied in Paris where he lived until the end of the 1920s. Deported from France to Auschwitz, he was the camp’s orchestra conductor. He was also a very talented writer. Died in Paris, in 1984.

Men are obliged to wear headgear, seats are not numbered