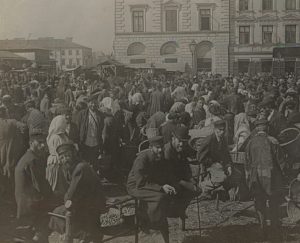 Published by the Austrian Cultural Forum, this book tells a story of people, city and Próżna street that still exists today – “the gate” to the past, former diverse and multicultural Warsaw. It is a new, third edition of the book written by Rafał Chwiszczuk.

Before WW2, the capital city of Poland had nearly 1.3 million residents and four hundred thousand citizens with Jewish origin. Some of them were engaged in the being and growth of Warsaw. Some became famous around the world, including: Ludwik Zamenhof who created Esperanto (in Esperanto “veturilo” translates as “mean of transport”), Janusz Korczak, social activist, mentor and protector of the rights of children, Akiba Rubinstein – one of the best chess players in the history of the game, Samuel Goldwyn, the co-founder of one of the biggest film studio, I.B. Singer, the winner of Nobel prize in literature, Ida Kamińska, the Academy Award winner, Władysław Szpilman, composer and Warsaw’s “Robinson,” Menachem Begin, Józef Rotblat, Peace Nobel Prize winners, Leonid Hurwicz, the Nobel Prize winner in economy, Marek Edelman, one of the leaders of Ghetto Uprising and opposition activist.