Excerpts will be read by Piotr Wiszniowski 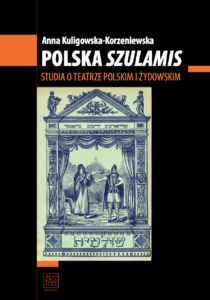 The author has been focusing on the history of Jewish drama and theatre for over 25 years, initiating researches dedicated to this important area of Jewish culture presence in Poland. She wrote the pioneering studies on the history of Jewish dramas on Polish stages. In addition, she also inspected the history of the theatre functioning in Litzmannstadt-Ghetto and the dramas written by Polish authors and dedicated to the Warsaw Ghetto Uprising. The studies have been included in the volume (Studies on Theatre, vol. 16), she highlights complex and very important relations between the Polish and Jewish theatre. Readers will be able to learn about the history of the Jewish theatre (19th century until now) but also about the contemporary Jewish and Israeli authors. [Professor Lidia Kuchtówna]

Event organized in cooperation with the BookBook bookstores